The singing of VOCES8 is impeccable in its quality of tone and balance. They bring a new dimension to the word ‘ensemble’ with meticulous timing and tuning.

The British vocal ensemble VOCES8 is proud to inspire people through music and share the joy of singing. Touring extensively, the group performs repertoire from Renaissance polyphony to contemporary commissions and arrangements; versatility and a celebration of diverse musical expression is central to the ensemble’s performance ethos.

The British vocal ensemble VOCES8 is proud to inspire people through music and share the joy of singing. Touring globally, the group performs an extensive repertory both in its a cappella concerts and in collaborations with leading orchestras, conductors and soloists. Versatility and a celebration of diverse musical expression are central to the ensemble’s performance and education ethos.

In the 2020-2021 season they are scheduled to perform 120 concerts in the UK and across Europe, in the USA and Japan. The season begins online with ‘Live From London’, the ground-breaking global streaming festival hosted by the VOCES8 Foundation that connects performers with audiences around the world. This will be followed by a similar online Christmas festival.

This season sees the launch of the VOCES8 Digital Academy, an online choral programme for high schools and colleges featuring live interaction with members of the ensemble, live and recorded lectures, and video resources to learn and perform music from the renaissance to today.

With an on-going programme of recordings, videos and live broadcasts, VOCES8 is heard regularly on albums, international television and radio, as well as maintaining a vibrant web performance presence. The ensemble is a Decca Classics artist and alongside releases on its own label, VOCES8 Records, has released acclaimed recordings that have all reached the top of the classical charts; a major new album with Decca Classics is planned for release in 2021.

VOCES8 is passionate about music education and is the flagship ensemble of the music charity the VOCES8 Foundation. Engaging in a broad range of outreach work that reaches up to 40,000 people a year, the group runs an annual programme of workshops and masterclasses at the Foundation’s home in London, the VOCES8 Centre at St Anne & St Agnes Church. Dedicated to supporting promising young singers, the group awards eight annual choral scholarships through the VOCES8 Scholars initiative. These scholarships are linked to the annual Milton Abbey Summer School at which amateur singers of all ages are invited to work and perform with VOCES8. Through the separate VOCES8 USA Foundation there is another set of 8 talented Scholars.

For more information about the music education programmes offered by VOCES8 and the VOCES8 Foundation please visit www.voces8.foundation.

"After silence, that which comes closest to expressing the inexpressible is music." - Aldous Huxley Read more 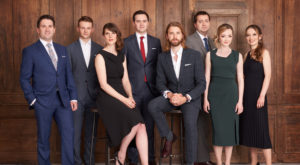 The singing of VOCES8 is impeccable in its quality of tone and balance. They bring a new dimension to the word ‘ensemble’ with meticulous timing and tuning.

The slickest of the lot...fans of a cappella ought to hear this.

Eight beautifully integrated solo voices… Every number here has something particularly arresting within it, all supported by persuasive and committed singing.

If you respond to the beauty of perfectly blended unblemished voices, this outstanding collection is for you.

Few ensembles put a programme together quite as well as VOCES8. For a disc with broad commercial appeal, ‘Equinox’ smuggles in a good deal of musical substance.

With mulled wine and a slice of Stollen to hand, this warming masterpiece will definitely see me through any hivernal hardship.

Thematically, it's a clever concept, and is both programmed and sung with rare intelligence . . . the ensemble has a distinctive texture and the acoustics are responsive but not too bright . . . [one surprise highlight is "The Luckiest"] by pop singer Ben Folds. Magical.

With their vivid word-setting and lively declamation, the English texts give a slightly homespun quality to the enterprise. Well sung, there’s a striking triple canon with Latin text to finish.

Thankfully, "Eventide" not only features some of the finest choral singing you'll hear anywhere; as far as chill albums go, it's one of the best I've heard . . . [all the performances] are without exception impeccable.

This is a lovely collection, reflective of the composer’s eclectic talents, and beautifully performed.

The singing is crisp and accurate … The period performance movement has demonstrated how to bring life and energy back to Bach’s choral textures, but none of the big names have produced anything that is quite as much fun as this.

The slickest of the lot … two parts King’s Singers, three parts Swingle Singers, a dash of Bobby McFerrin and California sunshine … fans of a cappella ought to hear this, not just for the singing but the production values and Jim Clements audacious arrangements.

A Boy and a Girl

Arr. for a cappella voices by Barnaby Smith View on YouTube

The Sound of Silence

"The making of" the EQUINOX album View on YouTube

The much-loved motet as recorded by VOCES8 View on YouTube

Kate Rusby's beautiful song, arranged by Jim Clements. The performance was recorded and filmed at VOCES8's home in London, the Gresham Centre. View on YouTube

Recorded at the home of VOCES8 in London, the Gresham Centre. View on YouTube

A music video by VOCES8 of Ben Folds incredible song, The Luckiest arranged by Jim Clements. View on YouTube

The soundtrack for this video is recorded on VOCES8's album 'Winter' released on Decca Classics in 2016. View on YouTube

A Hymn to the Virgin

VOCES8 performs Benjamin Britten's 'A Hymn to the Virgin' at the Gresham Centre in London. View on YouTube

Decca Classics sampler for the 2016 album, 'Winter'. View on YouTube